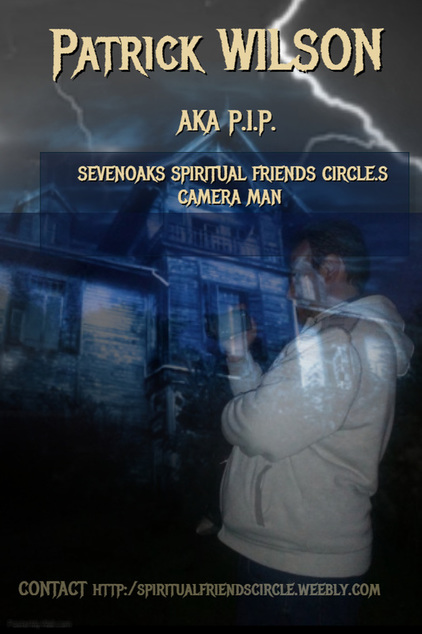 Patrick born and raised in Tunbridge Wells Kent lost his father at a young age had no beliefs in the afterlife until a few years ago when he experienced something one night, that changed his life.
In the years I have known Patrick he had no interests in anything spiritual , Paranormal, or Psychic things, as long as I have known Patrick, he was drifting and surviving through life, until the night that changed his way of thinking.
Then one day he said he would like to come to my Circle one night, I thought he was messing about with me, until he told me what had happened .
It seemed to me spirit gave him a kick up the back side, which had shook him to the core.
He joined our Circle in 2012  and soon realized there is more to life than this world, he soon learned how to give a reading, and he has come on in leaps and bounds with his psychic development.
He bought a crystal ball and Tarot Cards but his main interests is to capture evidence on Camera and through an Echovox and various other equipment.
Over the months he has saved and bought various pieces of equipment which he sets up in a separate room when we hold our Circle every Sunday evenings, he gathers as much evidence as he can and adds them to video, you can view these on this website, facebook , and YouTube.
Patrick also video's our Paranormal  Investigations and does his own investigation's in his family's home where he was brought up at Sandhurst Close.
Patrick is a valuable member of our Circle who contributes so much to our Circle, for which we are grateful , as without his filming and the help of his Partner Michelle, who uploads these films we would not see the evidence and enjoy looking back on our investigations.
Grateful thanks to Patrick and Michelle from all of us at Sevenoaks Spiritual Friends Circle
Mary Misselbrook 2012  - 2020 ©
Powered by